My name is Moira and I am a mother, a communications professional, a narrator, and a lover of books and storytelling. I’ve been living in my hometown of Oakville, Ontario since 2012 – I lived in Toronto from 1997-2011. Attended University College at the University of Toronto and completed an Hons. B.A. and M.A. in English Literature. Took motorcycle and glassworking lessons at Sheridan College, web design at Ryerson, and editing at George Brown.

I’ve been employed by the Province of Ontario for 17 years, and was an administrator at U of T’s University College before that. Worked for the Silver Snail Comic Store from 2003-2004 and loved it. Enjoy cycling, running, and yoga. Believe in the Oxford comma. Love food, especially Thai, Vietnamese, and Japanese cuisine. Hate cigarettes. Proud owner of a cotton candy machine; still wishing for a photo booth. 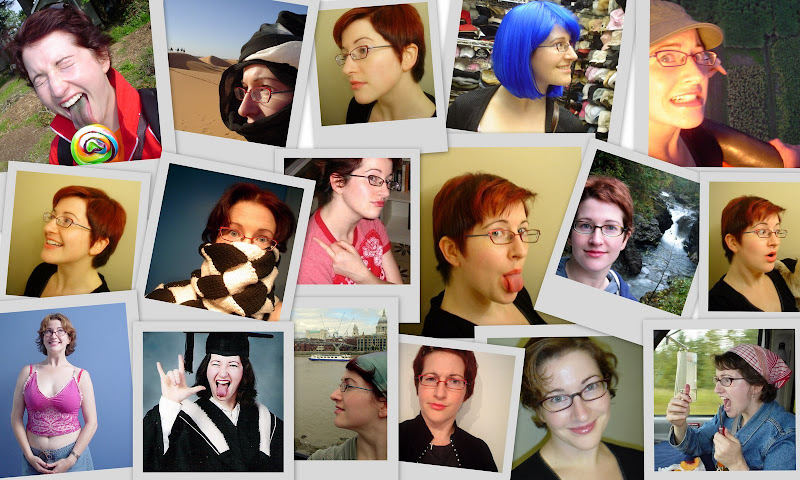 “I am happy to report that in the war between reality and romance,
reality is not the stronger.”

What would my last meal on earth be?
I figure, with it being my last meal, I get 5 massive courses. If you don’t like it, shoot me.

First course/appetizer – I’d start simply, with Caprese salad and a sliced avocado. Loads of fresh basil on top of little Ontario-grown baby heirloom tomatoes, with extra virgin olive oil, sea salt and lots of black pepper, and the creamiest bocconcini available. Avocado would be ripe, sliced and naked except for some salt and pepper. Accompanied by a deeply chilled glass of Cave Springs Riesling and small glass of fresh-squeezed orange juice.
Second course/fish – Next, a sashimi boat. Nothing fancy, just some absolutely fresh, sashimi-grade maguro and sake with a mountain of pickled ginger and a small side of sweet potato, zucchini and lotus root tempura. Accompanied by a short, frosty glass of Asahi beer.
Third course/main – Green asparagus and fresh Ontario fiddleheads, pan-fried and seasoned with salt, pepper and aged balsamic vinegar. Salmon jerky, candied in maple syrup. Corn on the cob, drenched in sweet butter and cracked pepper and salt. Three tiny rounds of the choicest cuts of steak, ostrich and venison, grilled to rare and drizzled with peppercorn gravy. Raw oysters from P.E.I. Accompanied by a nice Valpolicella.
Fourth course/spicy – Spring rolls and clear, spicy dip from Peter Anan Thai in Weston. Spicy beef papaya salad and a little bowl of hot and sour chicken soup from Ginger on Yonge Street. Chicken roti from Island Foods in the Grange. Chicken madras with hot naan from Kathmandu on Yonge. Tibetan dry beef in noodles with gravy from Everest on Queen. Accompanied by both a small gin & tonic made with Bombay Sapphire and a slice of lime, with some grated rind over the ice cubes, AND a tall Thai iced tea, with condensed milk balanced on top of a pile of ice cubes, and dark brewed tea underneath.
Fifth course/dessert – Being the last food I put in my mouth before dying, this would have to be epic. I think I’d want a triple-tiered tray, actually. The top tier would be “creamy”, holding one scoop each of Greg’s coffee toffee, roasted marshmallow and green tea ice creams, with a tiny cup of steaming hot fudge topping and sticks of chocolate-coated crystallized ginger root and orange peel on the side. The middle tier would be “tangy” with tart lemon squares and mouth-puckering key-lime pie. The bottom tier would be “comfort” with piping-hot cinnamon-nutmeg-treacle flavoured rhubarb-apple pie with a double cheese crust and a bowl of creamy, decadent, boozy tiramisu direct from Siena, Italy. Accompanied by a glass of ancient, full-bodied port and a full pot of Royal Benghal Tiger loose-leaf tea from the Tea Emporium served with milk and honey.

Creative outlets: I used to blog at pipesdreams.livejournal.com, and before that at Diaryland, dating back to 2003. I’m slowly migrating that content over to this site. I record audiobooks for Librivox, including all of Jane Austen’s Persuasion. I am an active member of the Oakville Quilter’s Guild, and you can see my knit projects on Ravelry.

Favourite Books: Running in the Family; The Name of the Rose; The Crying of Lot 49; Farewell My Lovely; Watchmen; The Dark Knight Returns; Ender’s Game; Me Talk Pretty One Day; The Golden Gate

“Even people whose lives have been made various by learning, sometimes find it hard to keep a fast hold on their habitual views of life, on their faith in the Invisible, nay, on the sense that their past joys and sorrows are a real experience, when they are suddenly transported to a new land, where the beings around them know nothing of their history, and share none of their ideas — where their mother earth shows another lap, and human life has other forms than those on which their souls have been nourished. Minds that have been unhinged from their old faith and love, have perhaps sought this Lethean influence of exile, in which the past becomes dreamy because its symbols have all vanished, and the present too is dreamy because it is linked with no memories.”
– George Eliot