My feelings about spandex are that it is a privilege, not a right. Bikinis, which are just very small pieces of spandex that expose a large amount of flesh, should in my personal opinion be the exclusive purview of people who are very young and very fit, or professionally really, really, ridiculously good looking. In short, bikinis are not for me.

However. That being said, I also have some very clear images in my mind about what a vacation in the sun in Mexico should look like. It should involve cold beverages with tiny umbrellas. Sombreros. Massive, gaudy beach towels. Coconut-scented SPF. And of course, bikinis. During my ongoing family photo project, I unearthed some pics of my Mum & Dad vacationing in Mexico in the early 70s. My Mum, clocking in at a lithe 110lbs soaking wet, was sporting a very small swimsuit. My Dad looked very pleased about this fact.

Thus, I have decided to kick my running training up a notch and try to squeeze my blindingly white bottom into a pair of rather petite string bikinis while I still can, before the ravages of advancing age and the unspeakable nightmare that is cellulite spoil the dream forever. After all, it’s not like the prospect of wearing a bikini is going to get any more appealing (for myself or my pitiable onlookers) as I get older.

Observe my own personal crucible: 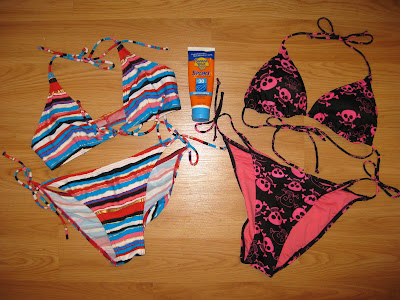 Achtung! These are not clothes meant for actual submersion in water! These are exclusively for posing by the swim-up pool bar, trying to look nonchalant while actually frantically sucking in one’s abdomen and wondering if you can casually sneak a peek down to check if all your strings are still tied.

To achieve this end, I’m hoping to run 5k on five out of every seven days in January, and to eat as healthily as possible until my departure on Jan 28. And maybe do some situps. And possibly investigate liposuction.

Another helpful motivator to keep me training is that I’ve signed up for a full roster of races for 2010 already, including my first full marathon in September (no guarantees; I might chicken out of that one).

This is partly because due to an accident in overbooking, I’ll be spending the last weekend of March in Boston attending PAX East, instead of running in Hamilton where I had agreed to do the oldest race in North America, the “Around the Bay Road Race” 30k in Hamilton, as a relay with Indigirl and Twiggy. Many thanks to my Top Gear-loving partner in crime CarbonMan for taking my place for the last leg of the run!