I have to warn you all, Iâ€™m not traditionally very good at travel journals. Iâ€™ve been an avid diarist for years, but my specialty is taking everyday boring stuff and making it interesting. When Iâ€™m actually seeing interesting things, my brain is too busy recording to ponder and analyze. In 2007-08 I was on the road for 6 months and stopped journaling after about 6 weeks. Iâ€™ll try my best, though.

Nothing much of note on the plane ride. It was long. I slept badly. My back cramped up. Babies cried. My movie pick was the lackluster â€œFour Christmasesâ€. Cullen: I tried to watch True Blood, but they only had s1 ep10 and I couldnâ€™t get into it. Lara: I thought of you and tried to be patriotic and watch some Canadian short films. Youâ€™ll be happy to hear they had 12 available, plus Passchendaele and Toronto Stories. The first short I watched, â€œNotes from the Space Time Continuumâ€ (2004) was pretty standard. Weird ideas, low production values, no dialogue. I struggled through it. â€œEvelyn: the cutest evil dead girlâ€ by Brad Peyton, was much better. A weird Tim Burton homage with live actors but a painted cardboard set, voiced over by rhyming omnipotent narrator, it felt a lot like watching â€œPushing Daisiesâ€. The first line of dialogue is literally â€œgiggle, giggleâ€. I think youâ€™d like it. Most of the Canadian shorts were either about death or math (there was one called â€œCircumferenceâ€ and another, â€œThe Story of Piâ€). 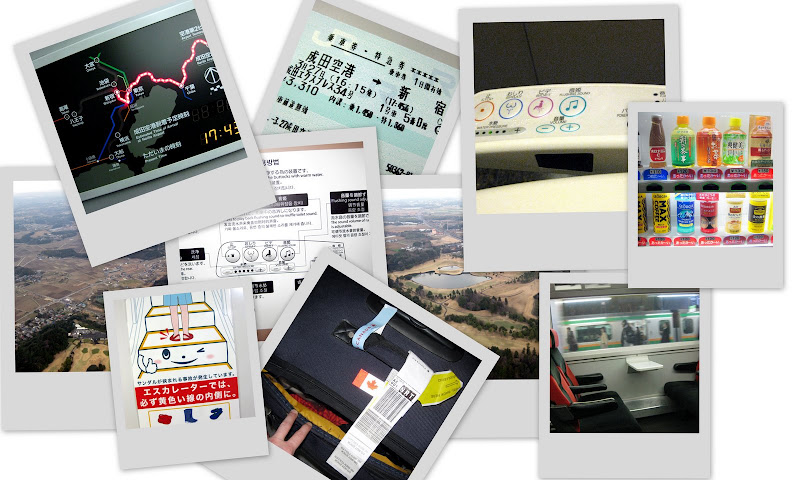 When I arrived yesterday, it was an overcast, cold, cloudy day in Tokyo (as it is again today). The moisture in the air is incredible â€“ stepping out of the airport into the train, thereâ€™s almost the same damp smell that you get when youâ€™re visiting England. My hair is curling like crazy from the humidity, and my asthmatic lungs don’t like it at all. I suppose I should have known the climate would be wet, given all the bamboo and rice growing natively. The view out the window as I headed away from Narita and towards Shinjuku was of thick stands of evergreens and gently rolling fields. The houses in that area are quite large, clustered together to leave arable land free for agriculture. They have many windows and beautiful roofs made of interlocking black or red clay tiles. The sidings are wooden, and the gardens full of topiary â€“ carefully manicured trees and shrubs. Flying in, many of the roofs were bright blue, but I suppose thatâ€™s an industrial standard?

I like hearing the announcements on the train and the lady in her little pinafore announcing the goods available for sale on her vending cart. Hearing Japanese spoken around me is still very surreal. I feel like Iâ€™m in one of the hundreds of subtitled import films Iâ€™ve watched â€“ Suzuki Seijun, or more appropriate for a grey, uneventful afternoon like this one, Yasujiro Ozu.

Arrived at Shinjuku and took a cab to my hotel, the Keio Plaza, where I nearly crashed but managed to drag myself out to see Heather and Bill and their lovely friend Jonathan for a night on the town and dinner in Shibuya. More on that next entry…

As requested, here is a short (1m 30s) video of some of the supremely weird Japanese television I watched before passing out last night.