The weather in Toronto hadn’t even settled below zero yet, but already weeks of sitting alone in my apartment and pacing restlessly from coffee shop to coffee shop in my neighborhood, trying to write, were giving me cabin fever. All work and no play makes Pipes a dull girl.

I had to get away; away from my too-familiar city, away from the barking dog in the apartment downstairs, away from my darling partner whose comings and goings to the daily grind of his office reminded me of the routine, society and paycheck I’d abandoned. I needed to know: would writing be easier if I changed settings? If I removed the temptations of cooking, cleaning and reliable Internet?
Just like that, I bought a cheap flight to the Dominican. 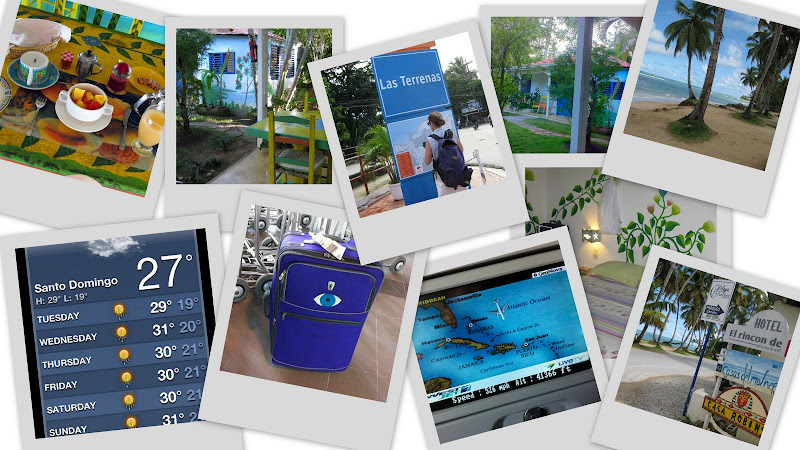 The salt air blowing off the sea is soft and moist, impregnating the paper of the books I brought along, bending the pages into curvy waves. By noon, everything looks like it has been dropped in a bathtub, including me.

My body, unprepared for a sudden thirty degree change in weather, is sweating like a bucket that has sprung multiple leaks. My hat, shirt and shorts are soaked in a potent stew of sunscreen, bug spray and intermittent rain.

Hours of grinding my teeth over downtown noise pollution seem hilarious now. I should know better; planet earth is noisy by nature. You can’t travel expecting silence, just a change of audio scenery.

Leaving behind the week-long fire alarm testing in my condo, I now have the operatic yawps of tree frogs in the bamboo outside my mesh-screened bedroom window. Instead of wailing sirens I have the roar and bellow of tropical storms, rain pounding on the metal roof, winds howling through the palms. In place of the high-pitched yapping of a toy canine, there are the mournful caterwauls and angry hissing of feral felines, and the distant boom of Latin beats from trucks parked on the beach. 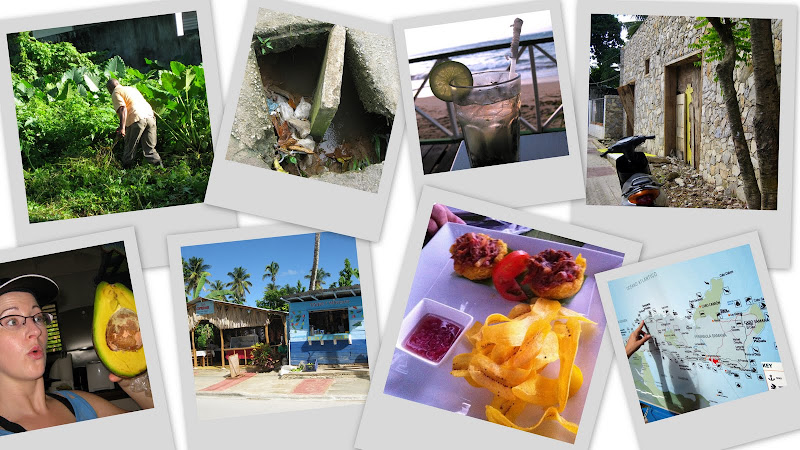 On my first night, I lay awake, not so much from the new sounds I could hear, but straining for one that was missing. Staring up at the gauzy curtain of the mosquito net I’d brought from home, I waited for the tell-tale bzzz alerting me to the fact that I was about to donate blood without consent. I heard nothing.

My bug fear approaches the levels of paranoia that some people have about zombies, nuns, or republicans. I can’t help myself, the little bastards terrify me. But the beach is not the jungle, and armed with an extremely liberal coating of DEET (I spray my legs and feet so vigorously that they look shellacked – my toenail polish has melted off in several places from the chemicals) I have so far managed less than 10 itchy bites, all on my legs. We’ll see how I fare over the next 10 days.

There are, of course, other bugs. This is the tropics; living things of all shapes and sizes thrive in a hot, damp climate. Unseen but distantly present are the creatures of nightmare: tarantulas, cockroaches, millipedes. Ever present but equally invisible are minute sand fleas, midges and ants so incredibly wee that you could easily mistake one for an eyelash or a speck of dirt until you see them moving.

While not as small as the head of a pin, Dominican ants are smaller than the head of a pen, and move easily under and over my laptop keys looking for who knows what. Miniscule vultures of the bug world, they collect trash and keep things tidy. In a real-life Invasion of the Body Snatchers, I’d killed the one mosquito I found and left its tiny carcass on my desk, as a warning to other winged marauders. Within twenty minutes it had vanished, carried away like Gulliver by the Lilliputians. 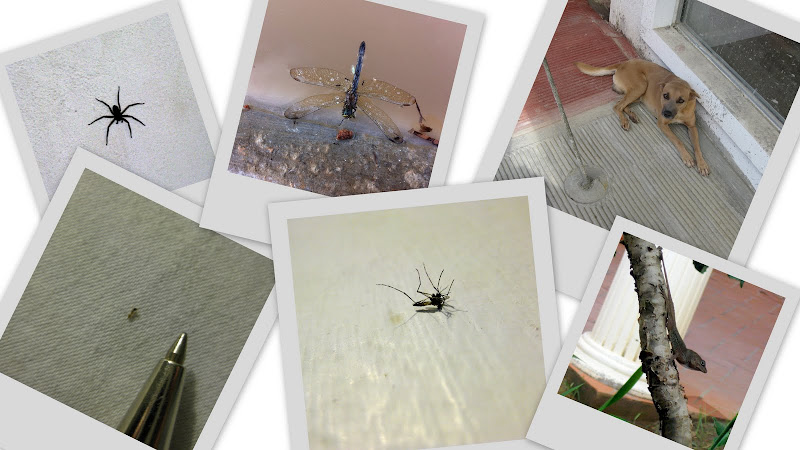 Gardening in the Dominican is not the delicate activity of care and preservation that it is in Canada. Back home the tools of the trade are greenhouses, watering cans, fertilizers, shovels and hand-held pruning shears. In the tropics it boils down to two essentials: the machete and the rake. First you chop back, then you clear the debris. 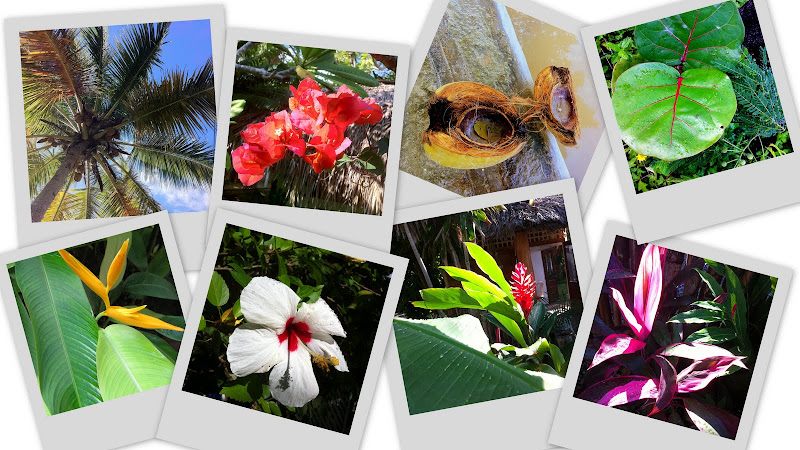 Plants I know only as indoor exotics grow in the open air here, and seem to have been fed magic growth serum. Avocados are massive, the size of a child’s head, falling with a heavy thud from roadside trees. Coconuts abound, and I’ve been warned not to fall asleep under any shady fronds in case a ripe husk succumbs to gravity and plummets to earth, delivering a fatal conk to my head. At the market, fat plantains and jumbo papayas sit on the shelf next to massive jugs of vanilla extract, green and brown bottles of cerveza and fragrant bags of rich, cheap coffee.

Eating has been entertaining. I’ve tried the traditional meal known as La Bandera (“The Flag”), which is a simple, inexpensive and tasty dish of rice, beans and meat. Yesterday I had a bony but delicious goat stew with arroz (rice). My first night, on a gourmet splurge, I had coconut shrimp with Cuban appetizers full of taro and plantain at a patio on the beach. I’ve enjoyed the local beers, Presidente and Bohemia.

Tonight I hope to taste the local wine. There is only one; grapes aren’t a big crop on this island. Made in Puerta Plata, it’s a light red – just 8% alcohol, but the packaging is pure genius. 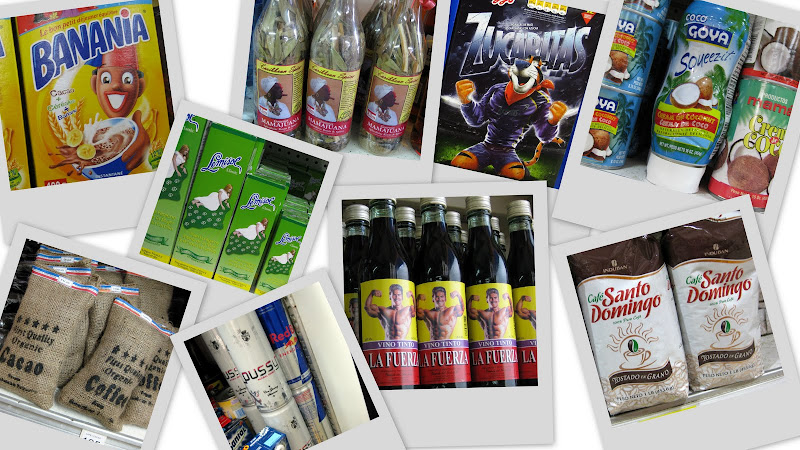 Here is my description of the label: A smiling bodybuilder with a physique like the Incredible Hulk and a face like David Hasslehoff flexes his muscles in front of a violently yellow background. Below, a slender purple band insists that this is not actually liquid steroids, but in fact, red wine or “vino tinto”. At the bottom, a bright red band tells us the macho brand of this honest brew: La Fuerza! This translates to “The Force”, suggesting that drinking enough of this stuff will help you perform Jedi mind tricks.

Despite the compelling name, I strongly suspect that this will not be the wine I am looking for, and that I will move along, shortly after my first sip.