Maybe you want to read a comic set in a place where the weather’s even WORSE than where you are. Make yourself feel better. Good idea.

You have options. You could truck across the futuristic Siberia of Enrico Marini & Thierry Smolderen’s ‘Gipsy’. You could fight off Alaskan vampires in Steve Niles & Ben Templesmith’s ’30 Days of Night’. You could explore shipwrecks in the icy Arctic waters of Jacques Tardi’s ‘The Arctic Marauder’.
Or… you could solve murders in Antarctica with Greg Rucka’s troubled U.S. Marshal Carrie Stetko in Whiteout. I recommend that you do.

Rucka is known for his strong female characters, and after reading this I bought the whole Queen & Country series — great spy thrillers.

Steve Lieber’s art is solid work: from parkas, guns and airplanes to sexy yet believable women who can kick ass. And of course, snow & ice.

Apparently, a movie version of this was made in 2009. The bloody Casting Director chose Kate Beckinsale to be Carrie(!) and replaced Lily Sharpe, the other female lead, with a guy. WTF? Awful, terrible, no-good idea. Part of the fun was the sexual tension between Carrie & Lily, their isolation in a place where men vastly outnumber women. Bah.

I love Kate B, but her face and body are all wrong for this role, and she’s English. Ms. Stetko is 100% pure U.S. Marshal. Personally, I’d have chosen Jorja Fox of CSI fame. She’s perfect – the right freckles, the badass / troubled history thing, the right hair and eyebrows, the right body type, knows how to play law enforcement. She’d also probably have been easier on the budget. 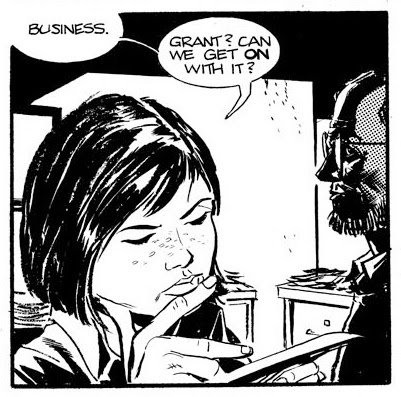 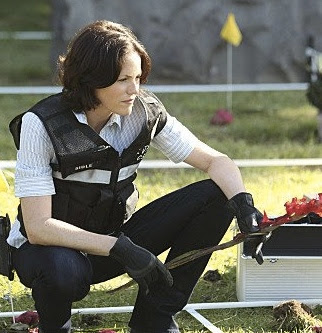