Itsukushima is an island in the Inland Sea of Japan, popularly known as Miyajima, famous for the bright orange “floating” Itsukushima Shrine. Mountainous and sparsely settled, Miyajima is just a 20 minute train ride from Hiroshima, then the 5 minute walk from the train to the ferry docks, then a pleasant 10 minute ferry ride to the island. The ferry service runs constantly – almost every 10-15 minutes from dawn until nearly midnight.

So far, I think Miyajima is my favourite of all the places I’ve been to in Japan. It’s a quiet seaside holiday town, and it smells like the sea. Salty and fresh and clean. I wish they’d hurry up and invent an electronic smell-o-gram so I could share with you the one dimension of my travels that can never be shared – the olfactory sense is for me alone to know and wonder at. The sakura on the island seem to have a stronger smell than elsewhere in Japan, too. And there’s a sort of circus smell overlaying it all, from the free-ranging deer and the monkeys living in the trees and the living earth all around.

I arrived late last Saturday afternoon in the midst of a rising fog. By the time I’d found my hostel and checked in, it had developed into what in England would be called “a real pea souper”. Thick mist all but hiding the ferry dock in the bay. I settled in to a quiet night but went downstairs to get a wireless signal and met sisters Sophie & Grace and their dad Doug, all from Australia, who were staying the night. We sat down and watched the hostel staff prepare the common room for the weekly takoyaki party, where they prepare fried octopus balls for the guests. We talked with two fellows named Dan and Don, and were taught how to fold origami shuriken and paper cranes by the hostel staff. It was a fun evening, and I agreed to go over to the island with Sophie and Grace in the morning. 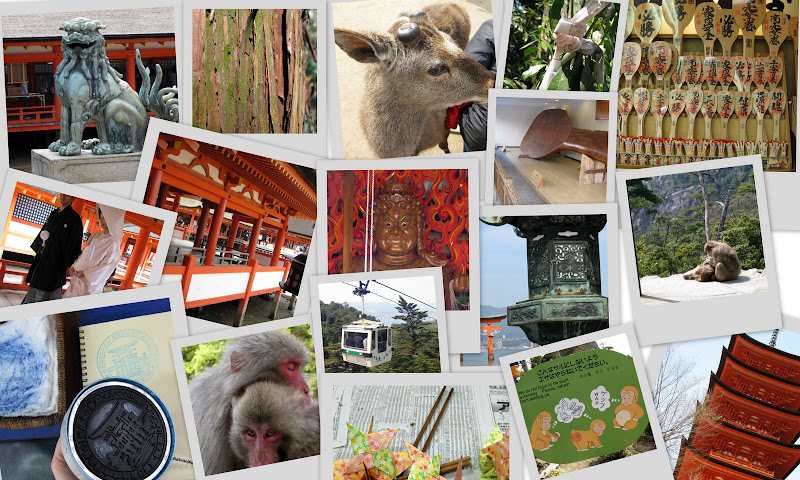 Most visitors to the island want to see the gigantic orange Itsukushima Shrine with its torii in the middle of the sea, eat the street food, view the sakura and shop in the market district, but personally, I was going for the monkeys and the world’s largest spatula. Because nothing says “I love you” like a spatula. This meant that after a morning of pleasant wandering about the shrines, feeding the deer, drinking glass-ball lemonade and listening to the cries of the local hawks floating over the sea, my lovely companions and I parted ways, with the idea of meeting up for karaoke in Tokyo the next weekend.

I took the Miyajima Ropeway cable car to the top of Mount Misen, a 535m elevation with beautiful views of the Inland Sea. Not recommended for people who are afraid of heights, but gorgeous if you’re okay with being suspended hundreds of feet in the air over sheer cliff faces and forests on two slender cables in a tiny metal box with 5 other people. I was fortunate to see some snow monkeys at play on the mountain peak (see video below) and then walked the hour-long 3km hike down the mountain to the park; easily one of the most beautiful, peaceful, fragrant hikes I’ve ever been on. When I reached the bottom of the mountain, I paused for some chicken yakitori and an almond-paste filled momiji manjÅ« cake made in the shape of a maple leaf.

The globally popular flat wooden spatula used to serve cooked rice is said to have been invented by a monk who lived on the island. Spatulas are a popular souvenir in all the Miyajima markets, and the island boasts the world’s largest rice spatula. I made a pilgrimage to see this wooden behemoth, and duly photographed it. This concludes the writing part of my trip to Miyajima. Now, sit back and enjoy my amateur nature videos.

2 thoughts on “Miyajima: Monkeys, Deer and the Sea”