This weekend D & I went on a 4 day mini-break to visit friends in Sackville, New Brunswick.

When I put the word out on my Facebook that I was heading to the East Coast for my first proper trip to NB (stepping off the cross-Canada VIA train for 15 minutes in Moncton to get snacks at the Sobey’s doesn’t count), I was deluged by eager recommendations of things to do. Here’s what we managed to squeeze in to four days, and what will have to wait for next time: 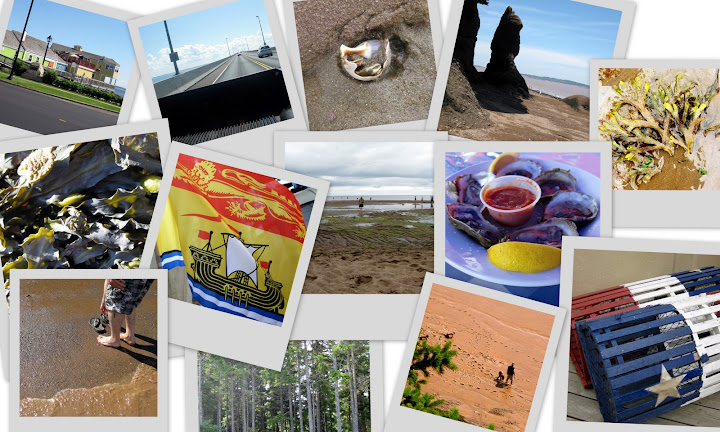 New Brunswick was obligingly sunny and hot while we were visiting, and the fresh air was delicious. Despite a 5am wake-up call on Friday to get to the airport, we were revived by a lunchtime boat full of fish at Pink Sushi on the main strip in Moncton, before driving to Sackville to drop our bags.

As soon as we arrived the Megaphones entertained us with some playful backyard wrestling (by all accounts a popular sport in NB), assisted by Beta, a large furry muppet masquerading as a dog.Â Sunshine and sleeplessness overwhelmed me; I was in dire need of a nap. However, when you’re staying with a family who have nicknamed themselves “the Megaphones”, you have to expect some audio turbulence when anyone in the house is awake. If an airplane at takeoff is 180 decibels, and a chain saw is 110, I’d say the average volume that the Black Eyed Peas were played on the rockin’ stereo in the kitchen was a solid 95dB. Boom boom pow, indeed.

As darkness fell, it was declared time to migrate downtown for Sappyfest, Sackville’s summer indie music festival. After priming at Ducky’s, we ordered some incredibly chocolatey shakes in Mel’s Tea Room that tasted like Nestle Quik with a splash of milk thrown in to water the syrup down slightly, then ambled across the street in the rain to hear some great amateur rap at Uncle Larry’s.

Saturday morning dawned clear and beautiful, so D and I strapped on the running gear, harnessed the dog and hit the rural backroads for a nice 6km in the sunshine. The only people we saw on the whole run were two old guys sawing logs in a wooded lot. I’ve never breathed so deeply in my whole life.

The afternoon was spent on a road trip with P & L across the billion-dollar Confederation Bridge between NB and PEI. Because we had a 5-year-old along for the ride it was IMPERATIVE that we stop for ice-cream, so we eschewed Charlottetown for Summerside. Salt-water taffy and Green Gables potato chips were bought as souvenirs at the brightly-painted wooden tourist wharf, then we settled down for some freshly-shucked Malpeque oysters and a pint each of locally brewed Sir John A. Honey Wheat and Island Red on an ocean-side patio. Rumour has it that oysters and other shellfish should be eaten only in months with an “r” in them (note: August has no “r”) but I found nothing to complain about.

When we got home, everyone else was up for an evening of Sappyfest but I felt like staying in and finding my inner domestic goddess, so the Megaphones headed out to hear some music while I relaxed and raided the kitchen for baking materials. At 2am when the crowd got home, there was a huge vat of chili-without-chili and 12 piping hot “from scratch” peach-raspberry custard tarts waiting on the stove. 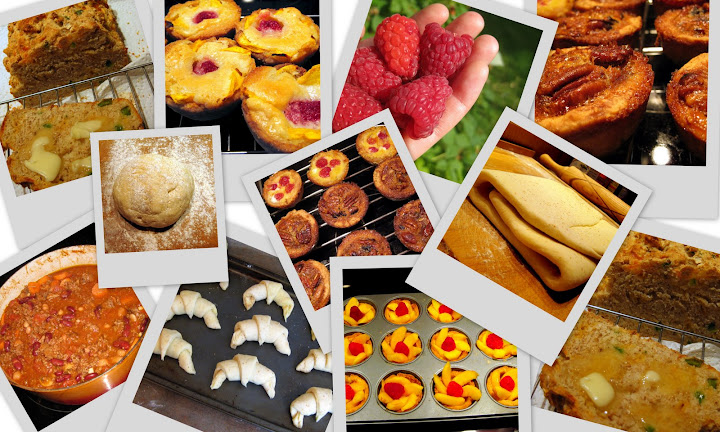 On Sunday the delightful C drove us out to see Hopewell Rocks, which was well worth the $8 admission fee. We arrived just before absolute low tide and walked along a shady green path to the view point overlooking the vast red mud flats below, where kids were frolicking and sliding about, looking like they had just emerged from the primordial ooze. C was in awe of how far out the water retreats in the Bay of Fundy, since last time he’d visited the tide was further in.

We took the metal staircase down to the seabed and walked over the rocks and seaweed, which I think is called dulse, and D squished his toes about in the muck (see video below). It was humbling to see where the curve of the rock showed the high point of the water, and to shudder at the thought of being trapped on the floor of the ocean when the surf started to roll inexorably towards the rocks.

Sunday night we ate criminally expensive lobster (note: don’t buy them cooked at Sobey’s, it’s highway robbery) and had a night at home with red wine and a crackling bonfire in the backyard. I went insane and decided to spend the evening engaged in a bake-a-thon, starting with Jalapeno-cheddar beer bread, followed by pecan butter tarts, lemon curd raspberry tarts, and then prepping the yeast-dough for butter croissants and pain au chocolat to be made the next morning. All from scratch. It was a bit of a baking rampage, to be honest. I was making pastry like it was going out of style.

Monday morning found me exhausted and hungover, and everyone else in the house relatively perky. I finished rolling out and baking the pastries, and then joined the convoy bound for the beaches in Acadian country, specifically la Plage de l’Aboiteau in Cap-PelÃ©. We went, we played with crabs and got sand in our hair, walked on fluorescent green seaweed that was soft like hair underfoot, got our toes nibbled by wee shrimpy creatures, then scoffed down some fried clams before taking A to the airport and D & I back home to pack our bags. Then it was off to downtown Moncton for a bit of Mexican food and some afternoon drinks to brace for the long night’s flying with a stopover in Montreal. And now, back to our regularly scheduled programming.

2 thoughts on “Baking, Shucking & Mudding on the East Coast”