I’m going to my first ever Penny Arcade Expo in Seattle in a few weeks, and I admit to having performance anxiety. This is not my first time at a large gathering of nerds – I’ve been to many conventions of the comic book variety, including San Diego, but this is different. These are gamers. They’re YOUNGER. A lot of them are TEENAGERS. I’m almost as old as PONG, dammit.

At a comic con, nobody’s going to ask me to sketch a panel for them, but at PAX, I will likely be invited to join a game where there is an actual “skill” component. There are tournaments. People bring laptops. At a comic con, the only real requirements are the ability to read sequential panels and to be able to talk shop. I speak Geek fluently, and can jump into a sober conversation about Alan Moore or Frank Miller at the drop of a hat. Gamer is a totally different language (and I don’t just mean 133t). I am way, way behind on recent G4 news & reviews and it doesn’t help that my taste in games runs to obscure puzzles, side-scrollers and Japanese weirdness rather than the ubiquitous Halo franchise. What if the other kids laugh at me when I say my favourite games that don’t involve Italian plumbers are Psychonauts, Chibi-Robo and Portal?

Speaking of kids, I’m also feeling a bit age-conscious. I keep telling myself that there are upsides to being an adult gamer. At 31, I have nearly infinite disposable income, once rent and groceries are covered, so I can buy all the consoles and peripherals and software I want. If I want to stay up all night, or even all weekend, playing an uninterrupted online tournament, nobody can tell me to go to bed or turn the machine off. But unlike the swarms of teens and 20-somethings who will form the bulk of the attendees at this event, my reflexes and hand-eye coordination are slowing down, decaying really, and I simply don’t have the time or attention span to dig down and play through every side-quest, map out every dungeon, read every walkthrough and try every cheat code.

My advancing years kept me from entering the draw to be part of the annual Omegathon, where 20 lucky gamers get to compete in a variety of games for the championship title. Why would I avoid such obvious fun and adventure? Because, dear reader, the odds seemed extremely slim that the final round would involve Dr. Mario for the N64, which I spent years mastering, and inversely rather good for a death-match in Halo2, where I’ve spent at least 8 hours mastering the trick of walking into corners and accidentally blowing myself up with my own grenade, then throwing my controller at the wall. I was completely sure, right down in my gut, that if I had the hubris to shoot for glory in these gamer olympics, I would be picked, would be one of the only females in the chosen twenty, and would then promptly get pwnd by some pimply pre-teen boy in Round One, probably playing something I have zero experience with like Magic: the Gathering. Emotionally and spiritually crushed, I’d be dragged from the dueling grounds, sobbing out, “What in the Hell *is* mana, anyway?!?”

In lieu of joining in the potentially-humiliating Omegathon, I decided to participate in the softer, gentler side of gamer culture and bring with me a large, personal donation to Child’s Play, the Penny Arcade children’s charity. Here it is: I am handing over my beloved Super Mario Bros quilt to Tycho & Gabe for their annual auction. Bid on it if you want to own something awesome and totally one-of-a-kind. 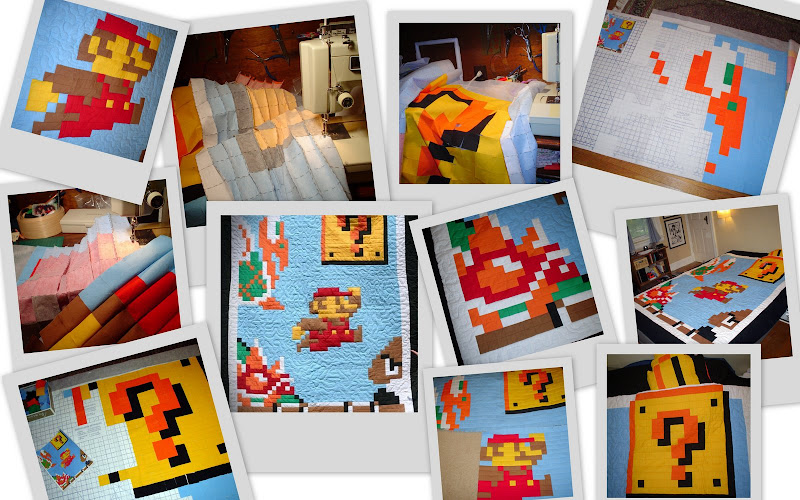