To remind myself why I got excited about going to Penny Arcade Expo in the first place, I’m going to peer back through the mists of ancient history and review my gaming track record.

I’ve been playing video games for a long time. It’s hard to say exactly how or when I started: I think it might have been in 1985, when Oregon Trail appeared on the Apple IIe computers at my grade school. My parents had already bought a Commodore 64 for our home by then, and bought me my first IBM-PC two years later in 1987, but they wanted me to use computers to learn how to type and make spreadsheets, not to shoot squirrels, ford rivers and keep my oxen from dying. 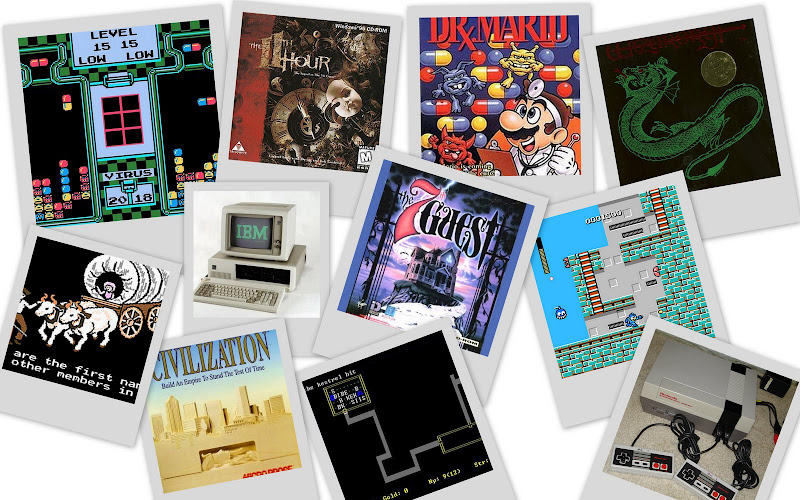 In 1988, at age ten, I changed schools and found a partner in virtual crime – Christie, my best friend of many years. The first clear memory I have of gaming with Christie was playing Rogue in her dad’s office on a computer the size of a convection oven. We boldly explored the Dungeons of Doom together, quaffing potions and battling kobolds on maps constructed entirely out of ASCII characters. Once we’d gotten a taste for character creation, it was on to Wizardry: I can still remember sliding in the 5 1/4″ floppies and waiting anxiously, pencils paused over grid paper, ready to map out levels and show that Mad Overlord who was boss. After defeating Werdna, we were well and truly hooked.

Sierra and BrÃ¸derbund defined our pre-teen years with Carmen Sandiego, Myst and King’s Quest, and even an illicit peek at the sexy pixel ladies in Leisure Suit Larry. Trilobyte and MicroProse carried me through the mid-90s with The 7th Guest, The 11th Hour and the original Sid Meier’s Civilization. Eventually Christie got her first console (classic NES) and we fought our way through Mega Man, Dr. Mario and some less-known titles like Disney’s Adventures in The Magic Kingdom.

In university I wanted to study and run after boys, so gaming took a backseat. Bookended by one incredibly epic PC gaming session of Sid Meier’s Civilization II with David in first year and a near-crippling addiction to Bejeweled in my last year, I was relatively game-free.

Then I finished university and moved in with a boy who was a dedicated gamer and who introduced me to the new breed of consoles: the Gamecube and the PS2. I got so excited I bought him an Xbox to round out the collection, and for a year or so went haywire exploring what game developers had been up to while I was busy getting my B.A. I was wooed back into gaming with Fable and Syberia, Shadow of the Colossus and Katamari Damacy, Psychonauts and Time Splitters. When I moved out I decided to leave the Xbox behind, but bought my own PlayStation and spent a lot of money on one of the first hard-to-find Wii systems that I got from a guy who knew a guy (thanks, Petar).

Nowdays I still game, but I have other, far more time consuming hobbies as well so I do it in moderation. The most excited I’ve been in recent memory was seeing Little Big Planet‘s world-building capabilities and multiplayer goodness, and of course hearing Stephen Fry’s amazing voice work. Keeping my eye on Dante’s Inferno (though the English major inside me quails at the transformation of that epic poem into poop and vomit battles), and always hoping that Tim Schafer will bring in another home run with his soon-to-be-released BrÃ¼tal Legend action-adventure game. I mean, it has voice work by Jack Black and Tim Curry, so all seems well, but I do have trouble with loud noises, and I’ve never been a big fan of guitar-based video games. Bongos? Sure. Maracas? Sure. Guitars? Require too much coordination from my flailing limbs.

To close out, some short but revealing lists…