Poor LARPers. Back in 2002, Brunching’s Geek Hierarchy proclaimed the abysmal geekiness of individuals who choose to spend their leisure time dressing up as warlocks and dwarves, acting out campaigns “IRL”. The Shuttlecocks weren’t aiming to be cruel; they were just telling it like it is. LARPers languish in the deep netherhells of uncoolness – lower than tabletop role players, far below video gamers – they are mocked, often and hard. Even professional mockers like X-Play’s Sessler & Webb, aren’t above stooping to take cheap shots at these poor unfortunate souls (see: Wild Larping Kingdom for details). They are the whipping boys and girls of the geek world.

But what about a LARPer’s kissing cousin, the Cosplayer? Strangely, the cultural phenomenon of cosplay (dressing up without intent to perform) doesn’t suffer nearly the same degree of public stigma. Cosplayers are embraced as fun-loving jokers, beloved totems of the creative spirit found at conventions, in high schools and all over the urban sprawl of Tokyo. Recently, Felicia Day and the cast of The Guild made a joyful splash at SDCC by cosplaying as their online avatars.

All this fuss got me to thinking – in my many years of attending cons, I’ve never really dressed up. I found myself wondering who or what sort of video game icon I would choose to cosplay at PAX, if any. Laziness and my hatred of checked baggage instantly eliminated fun-but-bulky options like the King of All Cosmos or a Goomba. My firm refusal to expose my midriff ruled out nearly every female video game character except GLaDOS and Samus (again with the luggage problem). Maybe something subtle, something only recognizable by a rare few, something to weed out the hardcore from the n00bs. Then it came to me – instead of a character, why not dress as a notable girl gamer? Why not be Kate Libby from Hackers? 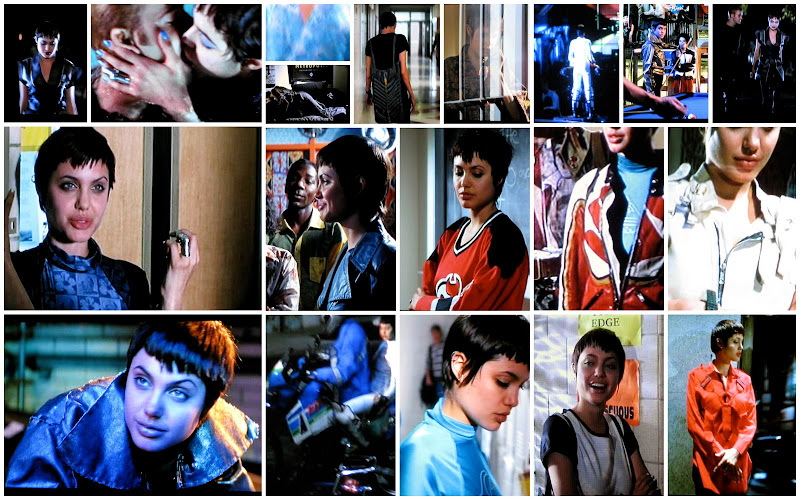 Please don’t think that I imagine myself hot enough to evoke Angelina Jolie, age 18 (before her stick-figure-hexa-mom phase) without the aid of considerable props. I did my homework and re-watched the film, to see if there was a particularly iconic wearable item beyond the vulcan haircut, hinged gauntlet ring, silver hoops and white or blue nail polish. I was surprised by two things: one, the shocking lack of photos of Angie’s various states of dress in this film (I thought the Internet had everything about celebs already?) and two, what an amazing job the costume artists did of building a self-consistent character with thoughtful wardrobe and make-up choices.

All of Kate’s clothes stay on a limited colour palette of white, black, silver, sky-blue and orangey-red: bright, confident, decisive colours with clear limitations. No blending, no softness, no apologies. The materials and style are entirely geared towards showing aggression, activity, sexuality, and an alien, unattainable quality. Kate wears slinky leather motorcycle gear, tight spandex surfer shirts, oversized hockey jerseys. She has outfits with straps, buckles and zippers in inappropriate places, kimonos and a dress with an obi. She’s basically flipping the bird at Trinny and Susannah.

Given the advent of Ebay and Etsy, I thought it would be easy to track down at least a few of these items. Again, I overestimated the webs. The only item that could be had on short notice is her New Jersey Devils hockey jersey. The red/white/yellow/black Suzuki Icon motorcycle jacket she wears is impossible to trace. I couldn’t find a reasonable facsimile of her black & white raglan shirt with the white-on-white skull & crossbones and legend “Too fast to live / Too young to die”, anywhere. The black & silver short v-necked satin kimono dress with black obi must have been custom made. And Quiksilver no longer has anything like a shiny blue low-turtleneck ladies surf shirt with their logo on the front, with or without a checkerboard flower pattern. I can only speculate as to which brand of club gear made the red and white jumpsuits (Snug? Kitchen Orange? House of Spy? FDCO? Tripp NYC?), or the wide-lapel silver pleather short jacket with long sleeves and exposed seams. Sigh. Better luck next time, Gadget.

In the end, I decided to use Ms. Libby as a muse for my new haircut, rather than as a model of fashion to imitate. Probably for the best – I doubt anyone would have caught the inside joke if I’d shown up to PAX wearing Kate’s club gear: a skin-tight white turtleneck and white pants with white plastic knee-high boots. Even your above-average geek would assume I was just doing a shitty job of cosplaying as a Stormtrooper with no helmet and no armor. Possibly due to my hatred of checked luggage.

Tell me, dear reader: who would YOU cosplay as?