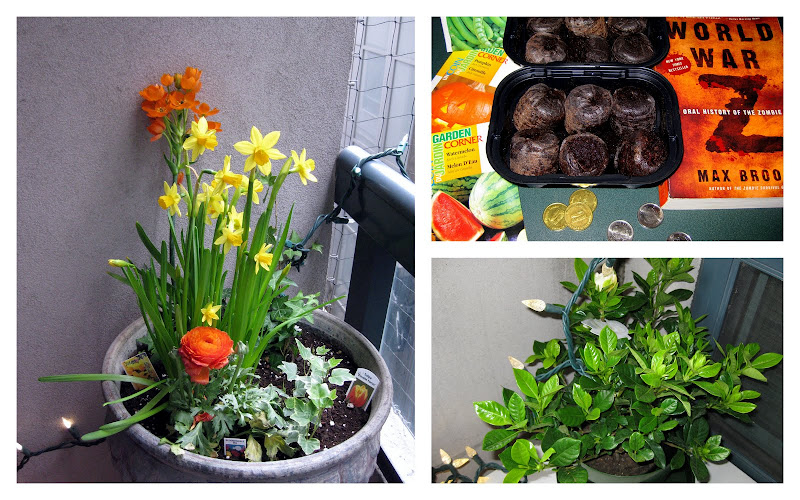 For those of you who got really sick of seeing the booties in my last post getting dusty in my blog, and are mad at me for not writing anything about my recent trip to PAX East in Boston, or the purchase of my new condo in the St. Lawrence Market area, or any other little personal things I may have been up to lately, all I can say is: BLAME POPCAP.

My life has been brutally annexed by the game Plants vs Zombies lately. It’s a simple little tower defense game – zombies are attacking your back yard (or roof, or pool), and you have to garden quickly to stop their brain-eating rampage from invading your home. I can’t explain to you why it’s so addictive, it simply is. For those of you who have had hours or days of your free time swallowed whole by the devastation of some of PopCap’s other delectable goodies, such as Bejeweled or Peggle, I hope you understand my predicament. On the plus side, it goaded me into making a nice container garden on my balcony (see above) in case of zombie attack on Yorkville. You never know.

Now that I’ve taken pains to explain why I’ve been such a naughty blogger lately, let me try and make amends. 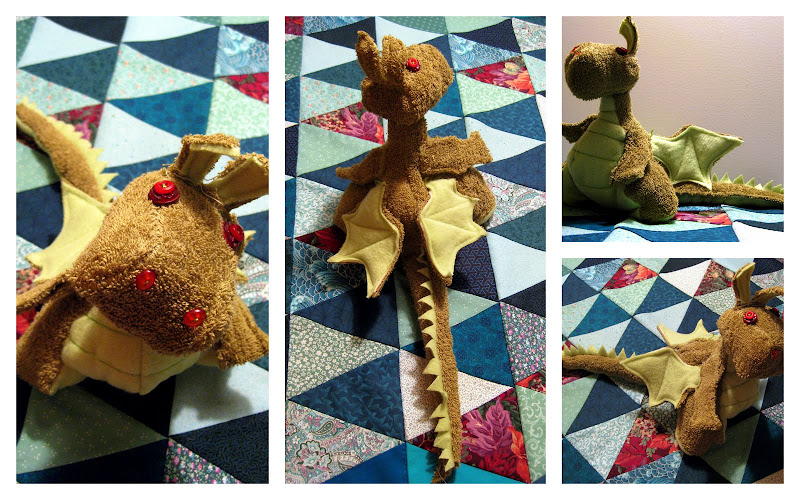 First, the day to day minutiae. After making a companion stuffed fleece and terry cloth toy dragon (named Lloyd, see above) to follow up on the triumph of my stuffed knitted Linux penguin (Grumpy), I am taking a break from toy making for a while and focusing on finishing my green triangle quilt (also see above). Desperately avoiding the desire to embroider tiny plants and zombies onto it. Knitting a pink version of Ysolda Teague’s Cloud Bolero, and am already off my stitch count (I hate yarn overs!). Reading a bunch of things – just finished a whack of obscure Agatha Christie (The Clocks, The Listerdale Mystery), and am working on re-reading Bird by Bird, Committed by Elizabeth Gilbert (on loan from MintyNinja), and a tentative start on Terry Pratchett’s massive Discworld series, The Colour of Magic, which has been aggressively marketed to me over the years by a series of maniacal fans, including Edwud, Philip and David.

Next, Travel. Pro Tip: if you are flying to Boston from Toronto, take Porter airlines, their service is AMAZING and their marketing is killer, and on top of all that, if you have a mobile phone with Foursquare and you check in at “Billy Bishop Toronto City Airport Ferry” while traveling the 400 meters to get to the Toronto Island Airport, you unlock the “On a Boat” badge. Wicked.

Boston was lovely. Darren and I decided two PAXes in one year was a bit too much, so avoided most of the heavy nerdery to do some sightseeing and sampling of the local restaurants with my friends HA and BW. Things I did enjoy at the con were the retro gaming room, which had a library of classic NES, SNES, Colecovision and Sega games, and the ancient but beautifully preserved systems to play them on. Right next door was the classic arcade room, where you could play free pinball to your heart’s content. I had a go at Dragon’s Lair and a completely bizarre Japanese game where you play pigs with dart guns being attacked by floating foxes held up by balloons (no, seriously) called… Pooyan. *snicker*

In Boston itself, we tried both ways of getting from Logan International Airport to Hynes Convention Centre. Another Pro Tip: don’t bother with the new “Silver” line. It sucks. It’s not even a subway, it’s just a bus that runs underground for a while, then gets insanely crowded, then lets you off at your terminal. Seriously, just take the shuttle to the Blue line, then transfer to Green. It’s WAY faster! We walked the whole Freedom Trail, starting at the Boston Common and going all the way to the USS Constitution. This was my second time walking it and it was every bit as amazing as the first time I did it. Also, the stupid crazy scary rusty see-through bridge between Copp’s Hill and Bunker Hill was still scary as hell, but I crossed it without plunging to my death, so that was okay.

Food-wise, the best place we ate, hands down, was the Parish Cafe on Boylston. Gourmet sandwiches from local celeb chefs all over Boston. Every bite was fabulous, nice patio, and a handsome wooden bar. Emma’s Pizza in Cambridge ran a close second for tasty, with great ambience, nice wine, and thin crust pizza that I could have kept eating all night. The rest of our noms were found on Newbury Street, including TeaLuxe which provided us with some powerful chai and matcha action.

I won’t bother writing about the new condo purchase, since we don’t get the keys until next Monday, and it won’t be much to look at for a while after that, since we need to renovate the bathrooms and kitchen, paint, buy furniture and move in. Hoping to get all this done before the G20 arrives in Toronto in late June.

2 thoughts on “I Blame PopCap”