After taking the train for 2.5 hours from Shinjuku, on the Chuo line, I arrived in Shimo-suwa, to be greeted by Stephen & Skye at the station. Across from the station is a tall dead tree and big arc of rope behind a carved piece of stone. This is abstract art symbolizing the Onbashira Festival, held in Shimo-suwa every 6 years, where they cut down 16 giant trees and drag them down from the mountains to mark the 4 corners of the 4 local shrines (spring, autumn, main and front).

After dropping off my bags, getting out my futon and pausing for a cup of tea, we walked along the main street to the public square, where there is another set of huge, dead vertical logs and another massive coil of rope, again celebrating the Onbashira (lumberjack) Festival. We crossed the street looking for a soba lunch, but the restaurant was full so we walked on up the street to the Akimiya (Autumn) shrine. 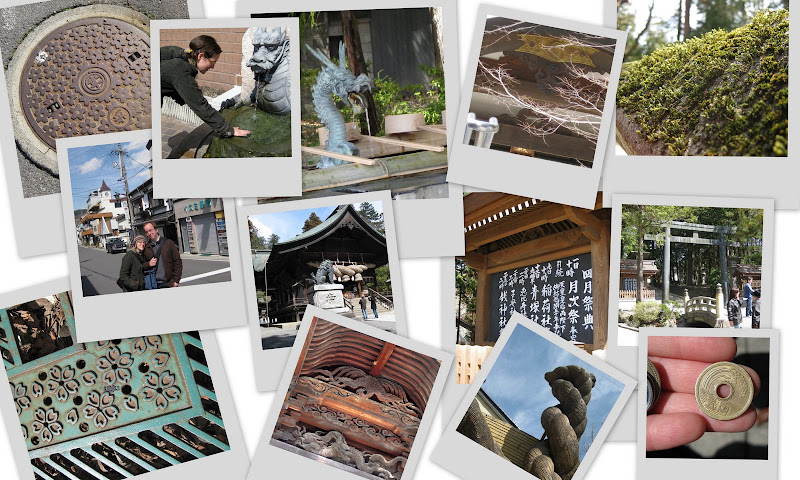 On the way there was a terrifying pink clown standing in front of what looked like a pink popcorn machine on wheels, guarding the door to a large building: this was a scary, random thing to see in rural Japan. Apparently Shimo-suwa used to be renowned as a manufacturing site for complex, animated music-boxes. It was known as the “Switzerland of the East”, and the building behind the clown was the music-box museum. As further proof that this wasn’t just Stephen pulling my leg, there was also a clock with a model of men rowing a boat right in front of the shrine entrance, that animated when the clock chimed the hour.

There were carvings on the base of the tall stone torii gates to the shrine, which Skye said was the “thank-you” donor name listing, to honour citizens of Shimo-suwa who gave money towards the building and maintenance of the shrine. Just inside the gates on the left was a huge bucket of fancy garbage, including arrows and rakes. Stephen explained that locals buy amulets and charms at the shrine to ward away evil and bring in good luck, but the charms only work for a limited period of time before you have to get new ones. The old charms are returned to the shrine for disposal, and of course you pay for both buying & burning. The rakes were to pull luck towards your house, and arrows to shoot spiritual pollution away from your house.

In front of the shrine on large pillars sit two Koma-inu or “lion-dogs”, one with mouth open (to scare off demons), one with mouth closed (to shelter and keep in the good spirits). They represent Ah and Un (“Ah” is the first letter in the Japanese alphabet and “Un” is the last, just as in Sanskrit) or alpha and omega, birth and death, the beginning and end of the universe.

At the back of the shrine in the area with the collection box, there is no image of the God or Goddess, just a simple round mirror, to reflect the face of the supplicant. To the right of the shrine is a building where visitors can purchase various charms to ward off evil, bring luck, fertility, safe travel, good grades on exams, etc. Stephen & Skye bought me a lovely orange “safe travels” amulet here.

On the way back from the shrine, we paused to look at a well-maintained traditional Japanese garden inside a fancy restuarant on the main strip. This restaurant is owned by a local fertility doctor who is a renowned specialist in Japan; I am informed that there are an unusual number of twins in the area.