On day 2 in Nagano Prefecture, Stephen & Skye took me on a day trip to their first home in Japan, lovely Matsumoto. To create a parallel for my GTA readers, Matsumoto could be the Niagara Falls of Nagano. It houses a beautiful black and white castle that is more than 400 years old, surrounded by a large moat full of koi with a distinctive red bridge over it.

There are also some lovely gift shops, including “Wabi-Sabi” where I bought some tabi socks and Stephen & Skye bought me a pair of threaded, easy-to-disassemble travel chopsticks in a lovely silk pouch. And some lovely tea shops, including Salon-as-Salon, on the second floor over a hairdressing salon on the main strip (just down the way from Wabi-Sabi). And the delightful Sushi Ten, which I wrote about earlier as being the place I first tried fried avocado. Now, for some history about the castle… 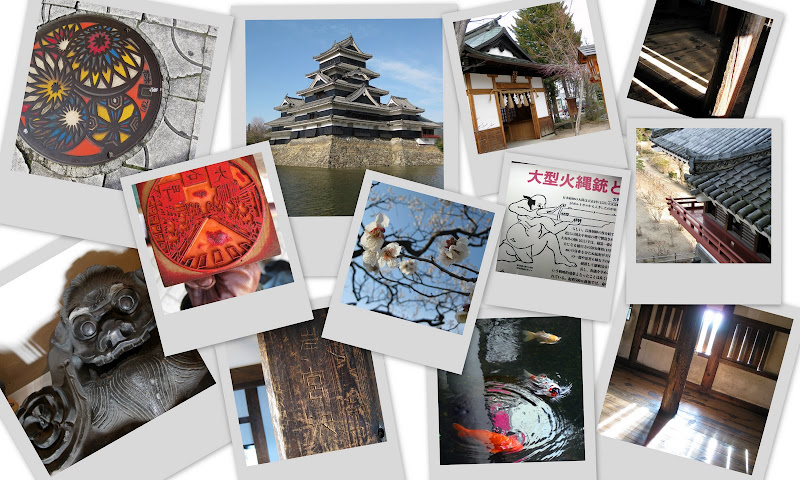 Inui Kotenshu: This minor keep is called Inui Kotenshu, because it stands inui or north-west of the Main Tower. Although it appears to have three stories, it actually has four. One floor is hidden from outside view. Inui-Kotenshu is connected to the Main Tower via a roofed passage. The keep is structurally different from the Main Tower through the use of numerous round pillars: ten pass through the first and second floors, and twelve pass through the third and fourth floors. These pillars were rough-hewn by adzes â€“ an axe-like tool â€“ and made from several types of wood including hemlock, spruce, fir or Japanese cypress.

Yazama & Teppozama: Each floor is fitted with holes for firing weapons. The long rectangular holes, called â€œYazama,â€ were for shooting arrows at the attacking enemy. The square ones, called â€œTeppozama,â€ were for firing muskets. Prior to the introduction of firearms from Europe, only Yazama were used in castle construction. After the introduction of firearms Yazama and Teppozama were used in combination. At Matsumoto, there are 60 Yazamas and 55 Teppozamas.

The Sixth Floor: The sixth floor lies 22.1 meters above the ground and could be covered with 16 pieces of rush-woven â€œtatamiâ€. It was designed to be used as the headquarters of the War Lord (daimyo) if the castle was under attack. Lowered from the ceiling, the Goddess of Nijuroku-yashin (26th night Goddess of the month) is enshrined. There is a legend connected to the Goddess. On the night of January 26, 228, in a vision, one of the young vassals on duty saw a woman dressed in beautiful clothes. Handing him a brocade bag, she said, â€œif the Lord of the castle enshrines me with 600kg of rice on the 26th night of every month, I will protect the castle from fire and enemy.â€ It is believed that because the bag was deified the castle was preserved and has survived to be the oldest castle in its original form.

Moon-Viewing Wing: The Moon-Viewing Room has openings to the east, north and south. It is connected to the Main Tower on its western side. With a beautiful exterior vermillion balcony and a vaulted ceiling, an air of refinement is presented here. The openness and refinement reflect the period in which the wing was built â€“ an era of peace following the turbulent age of the warring states. This room was built under the direction of Lord Naomasa Matsudaira, a grandson of Tokugawa Ieyasu â€“ the first Shogun of the Tokugawa period. Currently only two castles, Okayama and Matsumoto, have a moon-viewing wing.